View Video Transcription
[00:00:14] Traditionally in our practice, we use either the incision around the nipple or in the underarms and I am one of the younger generation surgeons. So silicone gel implants haven’t always been available to me for primary augmentation [00:00:29] and those kind of situations.

So I have traditionally used those smaller incisions to place a saline implant because they come deflated, you can roll them up and put them through, very tiny incisions and then inflate them once they’re in. So [00:00:44] when the FDA approved gels to come back on the market, there’s a higher demand from the patient population, but my patients also still wanted the small incisions that we had become known for. So, in my mind, [00:00:59] I had to figure out a way to get a gel implant through the small incision because it’s very difficult to get that pre-filled implant because they don’t come deflated. Their pre-filled in through a small incision [00:01:14] to the place where it needs to be. I knew that traditionally when you’re doing a gel implant although I didn’t have a lot of experience, I’ve used it with reconstructions and those kind of things that once you get half of that implant in the pocket, [00:01:29] move the implant to it’s desired location.

So I needed to come up with a way to transition that full implant into a shape and size that it would fit through the incision, and then allow [00:01:44] the pocket to do the rest of the movement. So I needed to bring it down to a size that would fit through my incision. So, I knew I needed a cone shaped device, I just needed a way to propel it. So what we came up with was [00:01:59] a shape funnel. We call it the Keller funnel. They named it after me. Imagine that and it is coated lubrication was another issue because an implant will not slide through that implant [00:02:14] without adequate lubrication. So it’s lined with a hydrophilic coating so that when it becomes wet the inside is very, very slippery. One of the co-founders came up with the word lubricious because he [00:02:29] coined it and owned the word of the day. I guess, it means very slippery but so when the inside of that funnel is lubricious, you can put gel implant in and actually by applying pressure on the back transition that implant through [00:02:44] a small opening and then once half of its in the pocket will do the rest of the work. I never even have to touch the implant. I can use the same size and decisions that we’ve always used for the saline. I did not have to convert my incisions at all. [00:02:59]

I use the that same incision that I would put for a saline that I do for a gel. I put them in the same position and that sub-muscular pocket which is best for an implant and I don’t have all that frustration [00:03:14] from a surgeon standpoint or trauma to the incision which the when you’re pushing on that implant trying to get it through that incision. There’s a lot of trauma to the skin edges and sometimes in the healing process, you can see that whereas, this is so fast and [00:03:29] moves through, so quickly that you don’t have all that, trauma. The other big benefits are and things that we have kind of moved towards. We may not have thought about it at the end. That wasn’t my initial thought. My initial thought was how in the world. Am I going to keep [00:03:44] my practice through a small incision which patients like in a place where they like them and use gel implants which are really nice for some patients. But as a side effect of what we’ve come up with other benefits, [00:03:59] are you?

Can actually load an implant into this funnel and never touch it. And there’s a lot of reasons not to touch it any time although we’re in a sterile environment, we’re using sterile gloves were using antibiotic solution to bathe the device and the implant [00:04:14] anytime there’s contact with skin or any kind of materials. There’s some risk be at minimal some risk of some contamination with bacteria. And it’s been shown that those increased rates of capsular contracture infections. [00:04:29] So if you can get that implant never touching anything except it’s new home, then you know you’ve accomplished something there. So we can actually pour the implant into the funnel, never touch it, orient it, [00:04:44] put it into the pocket and we’ve never even handle the implant, so we don’t have scientific studies to back it. But Common Sense, tells you that if you’re not touching the skin, you’re not touching breast tissue as it goes through. [00:04:59] You’re not touching your hands or your gloves or the back table, then you’ve cut down on the exposure of that implant for potential infection in capsular contracture.

It’s a brand new product. Now we have been in development for two years and [00:05:14] actually the first time I ever used it, the FDA approved gel and November of 2006. The first time I ever used the prototype, which is the beginning, was, in December of 2006. So, I have been using pretty much exclusively [00:05:31] prototypes and developmental product all the way to date. And for, since January of 2009, we finalized the material, we finalized the hydrophilic coating, and we have only been using the current [00:05:46] marketable device since January, but the whole technique and the procedure and all that we’ve been using for two years and we did a retrospective. Look at all of our patients and we actually had an okay, contracture [00:06:01] and no infections, I mean we don’t have a hundred percent follow up with that at a year to two years but we have a good forty percent so it’s brand-new a lot of Surgeons, don’t know about it. There’s a website Keller, funnel.com, [00:06:16] there’s an informational and educational video there so and I always get patients asking me about things they saw on Oprah or wherever and I’m always interested to look into it to see you know.

What it’s benefit. [00:06:31] Now, of course, there’s ways to do it with your surgeon. There’s ways not to do with your surgeon, I think it’s perfectly reasonable. You for you as a patient to ask, have you heard about this new technology, the Keller funnel? And if they haven’t, then, it’s so easy. [00:06:46] Now with the internet to get to the information is simply Keller funnel.com and they can get all the background research information, all the FDA information, all the biocompatibility information, it’s all on the website.

An explanation of the importance of use for this surgical device in the insertion and placement of silicone breast implants.

Silicone implants by nature are fully sealed devices and often have to be handled by the surgeon for proper placement and positioning within the breast pocket. Unfortunately, this also increases the risk of contamination of the surface of the breast implant when coming in contact with external elements like the outer skin of the patient, wound area, or the surgeon’s gloves. Reducing actual physical contact reduces the risk of capsular contracture considerably. Capsular contracture is a condition that has been linked to bio-films forming on the surface of the breast implant. 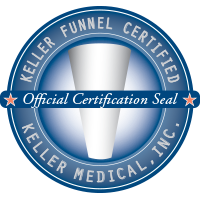 Kevin Keller MD, a board certified plastic surgeon, invented a very simple surgical device that was named after him. The Keller Funnel has been proven to reduce many of the post surgical risks associated with breast surgery when using silicone breast implants.

The device is very simple in design and consists of nothing more than a polymer coned bag with a self-lubricated coating on the inside. Once moistened, the lubrication makes the funnel interior very slippery so that the implant can be inserted into a much smaller breast incision without having to be touched by the surgeon’s hands.

The Keller Funnel™ has changed the way breast augmentations are performed with many new benefits detailed below: